You are here: Home / About David Walker 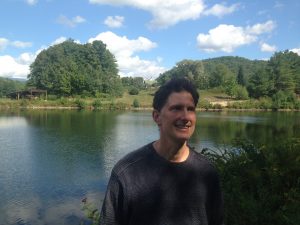 David Walker founded the Blue Hill Center for Yoga and Wellness in 1990.

“We had been practicing yoga at a large studio in Seattle and were a bit skeptical about what sort of instruction we would find in the small town of Blue Hill, Maine. To our surprise we found David Walker, and have brought our practice to a new level. David’s over 30 years of experience enable him to provide expert technical guidance with asanas and inspiration to push yourself to try challenging new poses, while bringing a sense of playfulness to your practice. The small studio environment ensures each student gets individual guidance and attention. I never thought I would even attempt a headstand, and now I look forward to these and many other poses I had deemed unachievable. We highly recommend trying one of David’s classes.”


Yoga Instruction at the Blue Hill Center for Yoga and Wellness…

is as varied as each student who attends classes, yet as universal as Yoga’s fundamental principles. David Walker and Caroline Sulzer’s approach to yoga is an enthusiastic blending of respect for the ancient teachings and creative exploration. Individual needs are always respected. A first goal when teaching is to emphasize compassion and increased awareness.

Whether you are challenged by limitations in your movement or are an experienced practitioner looking to take your practice to that next level or depth, Individualized Yoga Therapy or Instruction with David Walker may be just right for you. David structures his  sessions to suit a wide range of needs. He has worked with clients who are partially paralyzed, to another who suffered from a stroke, to women in their senior years who have trouble walking. At the other end of the spectrum, David works with practitioners seeking to refine their head or handstands and learn new variations to what is often considered the “king” of all yoga poses.

Individualized Yoga Therapy and Instruction is closer to the ancient tradition of Yoga than any other method. Yoga for thousands of years was communicated individually from teacher to student.The one-to-one work allows David to become more closely attuned to the student or client’s potentials and resistances, and to inspire transformation, healing, structural alignments accordingly.

David became certified in Phoenix Rising Yoga Therapy in 1993 and since then has combined this training with his studies in the Kripalu, Iyengar (In 2018 with Eddy Marks and Mary Obenhofer, 2017 with John Schumacher, 2016 with Patricia Walden), Anusara, Astanga, and Forrest Yoga traditions, and many hundreds of hours learning from his experience working with a wide range of people. Additionally, Davd has studied Trauma Sensitive Yoga with David Emerson and Bessel van der Kolk, MD.   Whether you suffer back pain, stress and anxiety, or seek to take you practice to the next level, David is available to guide, challenge and encourage you in your journey. 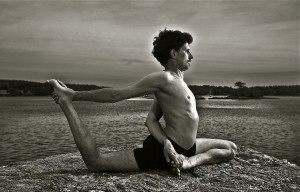 In addition to David’s teaching and therapetic work, he works as Wellness Manager at the Blue Hill Food Coop. David taught Yoga at the College of the Atlantic in Bar Harbor from 1995 until 2013. David completed his training with the Institute for Integrative Nutrition in 2013 and now combines this training with his extensive knowledge in natural supplementation to offer clients a six-month program of personal transformation. Continuing his long-time interest in Ayurvedic knowledge, David is currently enrolled in the American Institute for Vedic Studies’ Ayurveda and Healing Course, with Pandit Vamadeva David Frawley, one of the foremost Western scholars of Ayurveda and Yoga, and a doctor of Ayurveda.

David was certified in 1990 to teach Yoga after attending Teacher Training at the largest center for Yoga in the United States, the Kripalu Center for Yoga and Health in Lenox, Massachusetts. In 1993 he received certification as a Phoenix Rising Yoga Therapist, and in 1998 David trained with Nischela Devi, Angel Farmer, Victor Van Kooten, and other internationally respected teachers of Yoga through the American College of Yoga in Tucson, Arizona.

In 2006 David and his wife Caroline attended Level One certification with Amy Weintraub as LifeForce Practitioners focusing on Yoga for Depression and Anxiety. David and Caroline also completed Level One Training in Power Yoga with Beryl Bender Birch. In 2004, David and Caroline participated in special training with Advanced Senior Iyengar Teacher Patricia Walden. David is grateful to have studied several other times with Patricia.

In 2003 David, participated in a four-day immersion with John Friend, founder of the Anusara Tradition. Two years earlier David had the good fortune to attend a Buddhism and Yoga conference at the Kripalu Center, where he learned from Vipassana Teachers Ed Brown, Lama Surya Dass, Joseph Goldstein, and Sylvia Boorstein, and Yoga Teachers John Friend and Stephen Cope, Senior Scholar at the Kripalu Center, among others.

David has synthesized these influences and now teaches his own  approach based on his personal investigations of Yoga. He is particularly focused on Inversions and Restorative poses, and priniciples of Complimentary Force Balancing.

David has studied numerous times with Gabriel Halpern of the Chicago Yoga Circle, who B.K.S. Iyengar has called “one of his most advanced students.” David has studied twice with Manouso Manos, and had teacher training with Patricia Walden, the only two Advanced Senior Iyengar Teachers in the world.

In 1987 David received Shaktipat, an ancient and traditional transmission of Shakti from Anandi Ma, spiritual heir to Dhyan Yogi and beloved guru to the Kudalini Maha Tradition of Mantra Yoga.